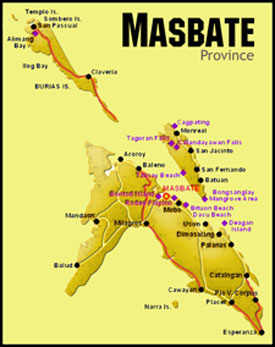 Masbate is an island province of the Philippines located in the Bicol Region in Luzon. Its capital is Masbate City and consists of three major islands: Masbate, Ticao and Burias.

Masbate City is a 5th class city in the province of Masbate, Philippines. It is the capital city of Masbate province. According to the 2000 census, it has a population of 71,441 people in 13,400 households.

Political Subdivision and Land Area
Composed of three big islands-Masbate, Ticao and Burias, the province is politically divided into twenty-one municipalities, three (3) congressional districts and 550 barangays. It has a total area of 404,707 hectares, which is roughly 23% of the Bicol Region and over 1% of the natural land area.

Topography
The general surface configuration of the province ranges from slightly undulating to rolling and from hilly to mountainous. In each island, the rugged topography is concentrated in the north-northeastern and gradually recedes to blunt hills and rolling areas in the south, southeast and southwest.

Masbate is subdivided into 20 municipalities and 1 city.

POPULATION & LANGUAGES
Masbatenos numbered 653,852 as of the 1995 census. Masbateno is the predominant medium of communication with a mixture of Bicolano. Waray or Cebuano is spoken in the southwestern towns. Masbatenos are also conversant in Tagalog and English.