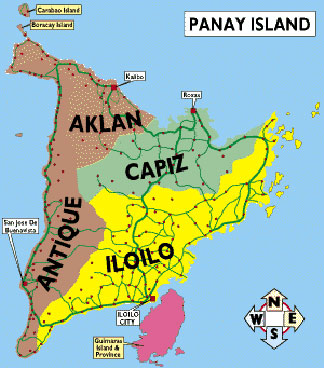 Inconclusive folk history recorded in the Maragtas by Pedro Monteclaro says ten Bornean datus landed at a site now known as San Joaquin town in Iloilo province. They purchased Panay from the Aeta, cultivated the land, and renamed the island Madya-as. They divided it into three communities: Irong-irong, Akean (which includes the Capiz area), and Hamtik.

Capiz, which was part of Aklan in pre-Spanish times, was one of the early settlements of the Malayas, centuries before the coming of the Spaniards to the Philippines. It was part of the Confederation of Madjaas, formed after the purchase of Panay by the Bornean datus from the Negrito king named Marikudo.

When the Spaniards led by Miguel Lopez de Legazpi came to Panay from Cebu in 1569, they found people with tattoos, and so they called it Isla de los Pintados.

How the island itself came to be called Panay is uncertain. The Aeta called it Aninipay, after a plant that abounded in the island. Legend has it that Legazpi and his men, in search of food, exclaimed upon the island, Pan hay en esta isla!. So they established their first settlement in the island at the mouth of the Banica River in Capiz and called it Pan-ay. This was the second Spanish settlement in the Philippines, the after San Miguel, Cebu.

Panay is an island in the Philippines located in the Visayas. Politically, it is divided into four provinces: Aklan, Antique, Capiz, and Iloilo, all in the Western Visayas region. The prominent city of the island is Iloilo City.

Panay is located southeast of the island of Mindoro and northwest of Negros, separated by Guimaras Strait. Between Negros and Panay lies the island-province of Guimaras. To the north is Sibuyan Sea and the islands of Romblon; to the southwest is the Sulu Sea.

Panay is the location of the famous legend of Maragtas, which chronicled the arrival of the Malay race to the Philippine islands.

The island lent its name to several United States Navy vessels named USS Panay, mostly famously the one sunk in 1937 by the Japanese in the Panay incident.