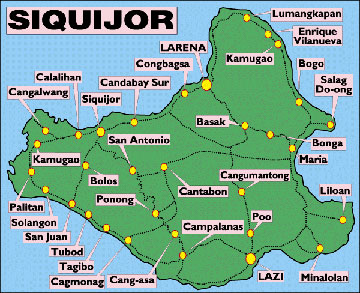 Siquijor is the third smallest province in the country both in terms of population and land area, after Camiguin and Batanes. For a time it was sub-province of Negros Oriental. Called Isla del Fuego of the “Island of Fire” by the Spanish before, Siquijor is considered by many Filipinos to be a mystical island, full of witches and other supernatural phenomena.

Languages. The main language spoken in Siquijor is Cebuano. English as well as Tagalog is also spoken by many of the residents.

Education. Literacy rate, one of the highest in the country, is at 92.5%.